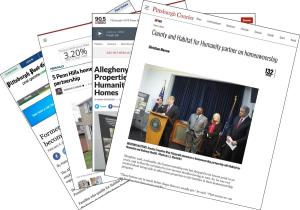 Jason Cohen Pittsburgh is a conceptual group of investors created to assist clients with real estate investments. The group, founded by Jason Cohen, also donates to the Habitat for Humanity.

The Allegheny County Housing Authority (ACHA) began working with the Habitat for Humanity in 2017. The CEO of Habitat for Humanity of Greater Pittsburgh, Howard Slaughter, Jr., announced the sale of five homes and two lots by ACHA will provide housing for eight families.

To buy a house through the Habitat for Humanity program, a buyer must invest 350 hours of time into the program to build up what they call “sweat equity” in addition to their down payment.

Slaughter hopes the five homes will be remodeled and ready for the families by the end of the year, and new homes will be constructed and inhabited by the end of 2018. While the ACHA already facilitates home ownership, Executive Director Frank Aggazio is pleased with the partnership and expects it to provide even more families with the housing they need.

Founded in 1909, the ARL added its wildlife center in 1997 to provide rescue rehabilitation services to all animals. The staff has more than 23 years of combined experience treating wildlife, and the center is fully licensed by state and federal agencies.

No animal is ever refused admittance and treatment at the ARL. Good Samaritans wishing to help injured or helpless wild animals should wear gloves and place animals, which are not used to human contact, in a box. Many such creatures also carry diseases.

It is also imperative to not feed the animal, since their diets are not the same as humans or even pets, and items as simple as bread or milk make them deathly ill.

The clinic accepts almost 4,000 animals each year and releases nearly 65 percent of them (twice the national average) back into the wild.